by RoxyPosted on December 23, 2018 Posted in Knitting, Little one, Uncategorized 2 Comments

I went out to the cat mint the other day, in the rain (it’s done nothing but rain for weeks now it feels!) and to my surprise, I found…

Jemima Puddleduck! I brought her in, dried her off, and we got gabbing over some nettle tea and discussed the weather in true British fashion…

Joking aside, I’ve picked up in my Beatrix Potter knits again and decided to start with Jemima so I would have the full cast for when Felix and I are acting The Tale of Tom Kitten…this pattern, like the others I’ve made, are the ones created by Alan Dart and after a request the other day by someone trying to find the patterns, it appears that they are completely out of print, you can’t even get them from the Alan Dart website…so if anyone does want them, eBay or Amazon are my only suggestions.

In other news, I’m up North for Christmas and have already had a ball – you can read more on the adventures over at Rabbies/Missy’s blog. (Exact link to be posted when she finishes typing her blog post, we are totally not racing, though I am definitely winning!)

Edit: she finishes her blogpost about today!

I’ll see you after Christmas! Have a good holiday no matter what you celebrate!

by RoxyPosted on January 14, 2018 Posted in Knitting, Little one 4 Comments 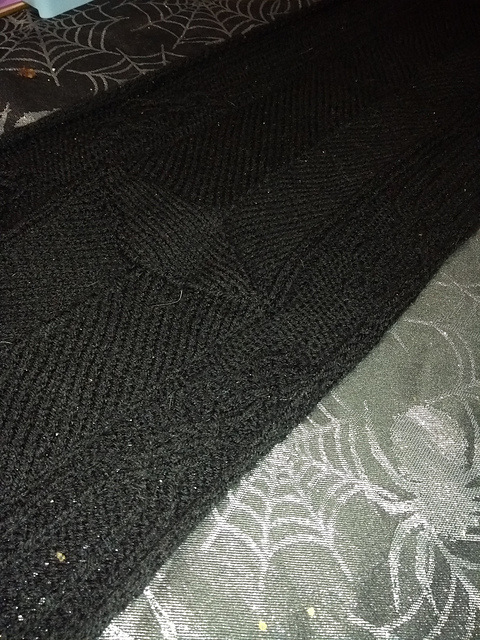 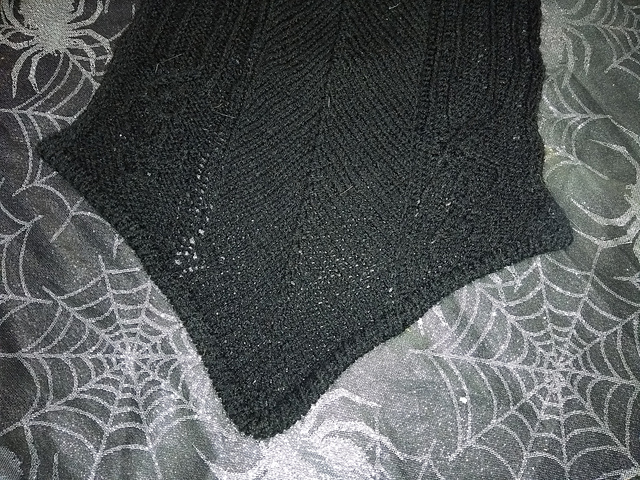 Look at the cable work! And the cute triangular shaped ends! Ok, it’s all black so not the easiest of colours to see all the detail, but it’s there, and I’m proud of it!

My last table runner died a death about…two years ago? It was light green, and met black coffee, which stained it yet my attempts to dye it resulted in nothing…so I picked out this pattern all the way back then and have only just got around to casting it on.

Anyhow, the reason it’s ‘more or less’ the pattern is that the centre diamond part confused me. Granted, having a little one waking me up four times a night and a not so little one having me up at 6am leads me to being easily confused…but I gave up on the pattern and winged it.

Came out fine, so that’s all that counts really!

In other knitting news I’m plodding on with big knitting project 2 still, but I’m about 3/4 done, so the end is in sight! Hopefully you’ll all see it next post!

Short blog today as pretty tired running around the park and duck pond with Felix and her best friend who we were looking after today. Inkling was marvelled by the ducks, but didn’t like the swans. That said, when they’re hissing and rearing because of a careless dog owner letting their dog run right into them…well, it’s a pretty scary sight!

Wool used – 4 (3 this week!)
Wool bought – 0
Wool given – 1 (Engel bought me a Small Clanger kit, its meant for Inkling as Felix has a Tiny Clanger, but it’s still mine right now! Another item on my to do list!)
Wool gifted – 0

by RoxyPosted on April 9, 2017 Posted in Knitting, Little one, Updates 2 Comments

Went swimming one day, over the hills and far away, mama duck said ‘quack quack come back’ but they were all eaten by a crocodile…Wait a second… 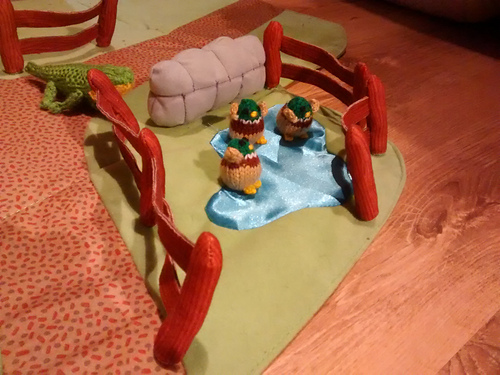 I gave in and knit Felix those ducks she wanted to keep her crocodile ‘company’ in the pond. The crocodile number has increased as well, there’s two helping control livestock…

For those curious, I tweaked the free Tiny Chickens by Anna Hrachovec to make these guys. Easy to do, just lots of colour changes! 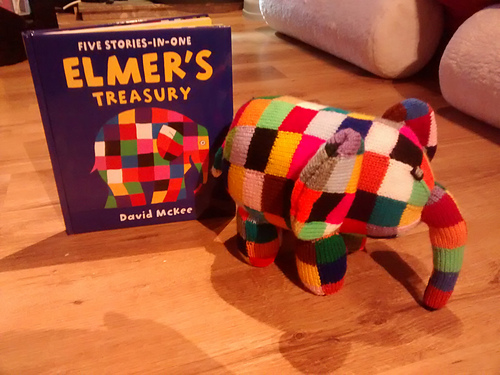 Yeah…I know I said I was 99% sure I would never make another, what with the 156 colour changes but…I did. This is my second Elmer the Elephant now, and again, it’s made using the ‘Eddie the Elephant’ pattern by Ann Franklin from the May 2015 edition of ‘Love Knitting for Baby’s. Engel came up with a method for working out the colour changes so they are more uniform but still rather random, does it look any better or more like Elmer?

Felix had a friend’s birthday coming up (it was on Saturday) and I know the gran is particularly fond of my knitted toys so…Yeah. One cuddly toy and Elmer the Elephant treasury and sorted!

Though this time, I really am sure I won’t be making more.

by RoxyPosted on September 27, 2015 Posted in Knitting, Updates 1 Comment 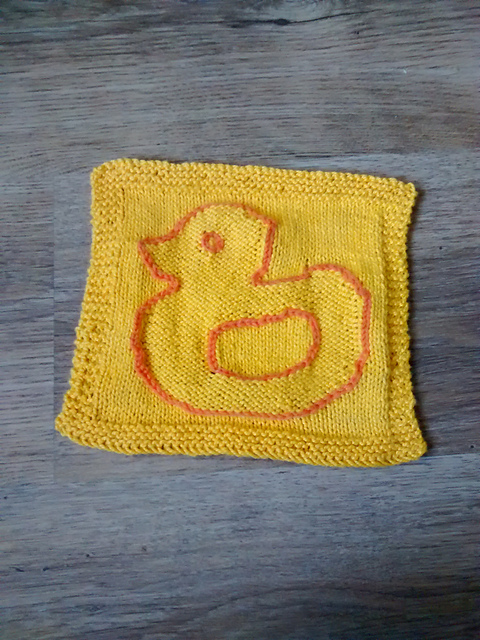 And here’s the mushrooms: 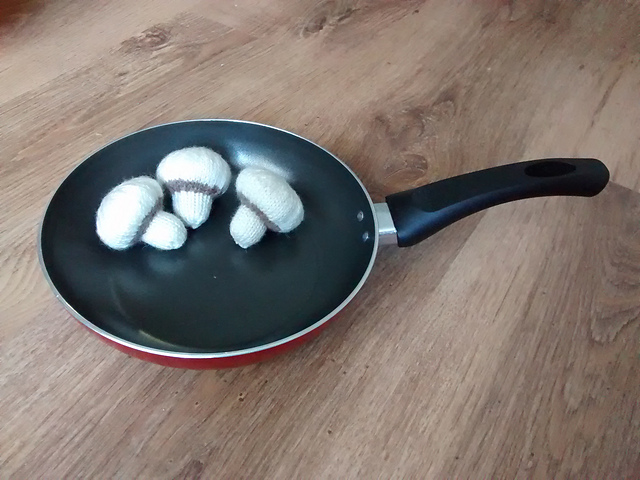 Both for Felix of course!

The duck is a free pattern by Mimi Codd, ‘Rubber Duckie Face Cloth‘ and the mushrooms are another free pattern, this time by Leslie Glenn and is aptly called ‘Mushroom‘. I could have knitted dozens of those mushrooms, cute, quick and easy…but three seemed the right number as play food for Felix. And the duck face cloth, thought it would help wash that mucky little face of hers during bathtime!

In other news, the commissions were finished and we all celebrated Felix’s second birthday at Chester Zoo on Saturday (birthday is actually tomorrow, hence the early post – more time to spend with the little terror on the actual day!) It was a great day out – the weather was gorgeous, the animals were making themselves seen, and far too much food and cake was consumed by all.

Hope everyone else had a good weekend! 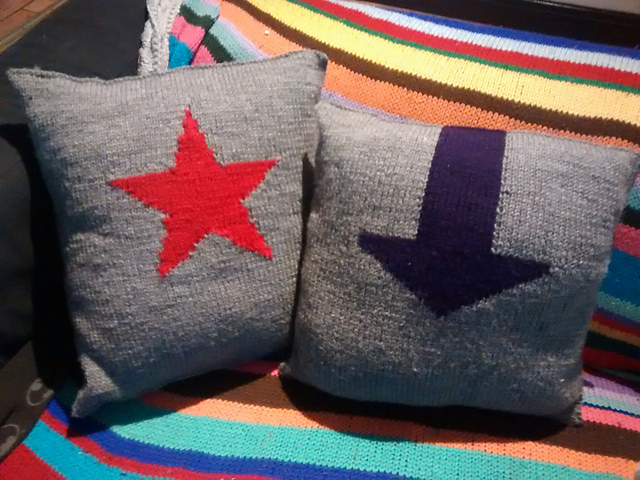 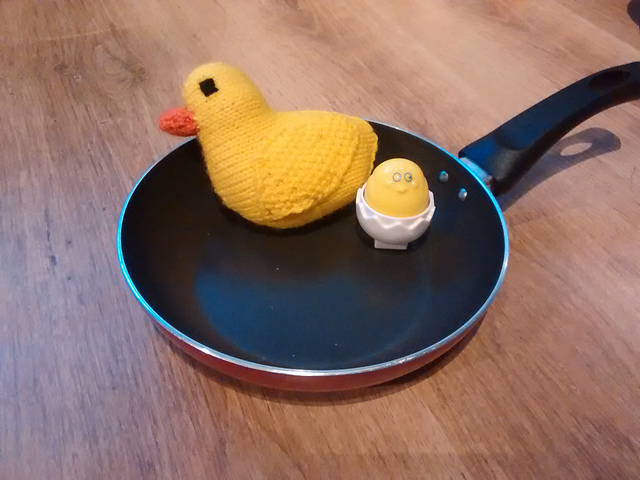