RoxyPosted on April 28, 2017 Posted in Cats, Knitting, Little one 1 Comment

Something that appeared shortly after Felix was born was a very old cat hand puppet. Turns out, this puppet was given to Engel when he himself was tiny. There was three apparently, two natural coloured and a green one, but as far as anyone can determine, there’s now just the one left.

As such, I was asked to create a few more, ones that could be taken out without fear of losing the last, original puppet. After some discussion, it was decided it didn’t have to be the exact same pattern, just close to it.

Couldn’t find anything so I dug out my notepad and set to work recreating the cat hand puppet. But since I hate sewing, it was going to be knit in the round. And have the ears incorporated into the actual head. and the tail would be made from picked up stitches to cut down even more on sewing.

Took three versions, but I give you: Cat hand puppets! 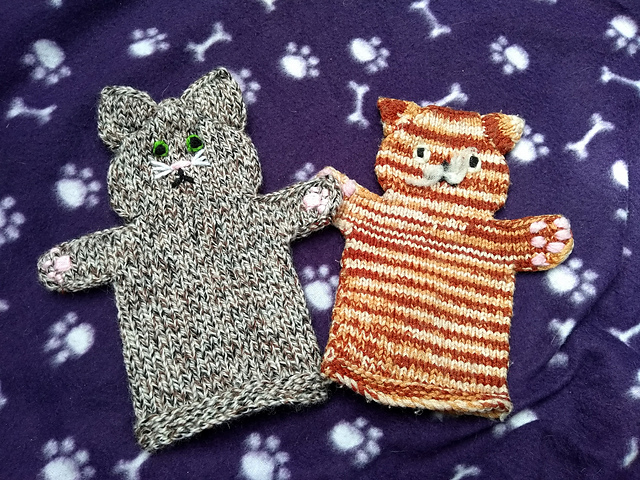 The original is on the right, mine is on the left. 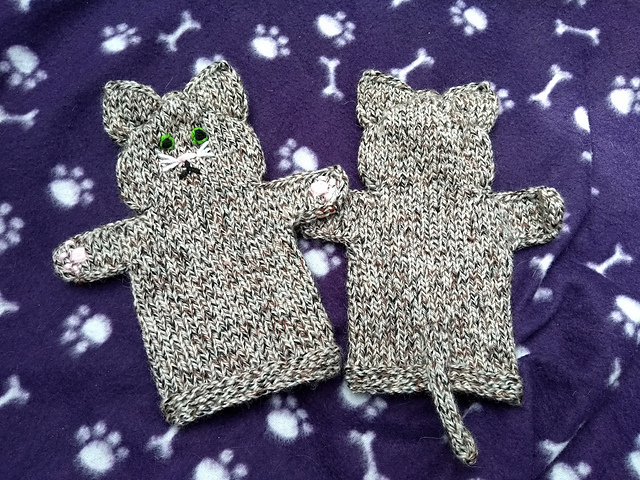 And a better photo of my version, which you can get as a free pattern!

Interestingly, the original appears to be knit on 3.25mm needles and with three strands of embroidery cotton. Front, back and each ear (fronts and backs) are all knit separately and sewn together, with a little looped tail. It really would have been a labour of love to make. Mine is a chunkier (4mm) and simpler version, so that many can be made to replace the inevitably lost ones.

I actually really enjoyed getting to have a good look at someone elses old, old project, and recreating the pattern – if even only very loosely in this case. In future, I’d like to do it again, but produce a true recreation. We’ll have to see if time will allow and if inspiration strikes though!

Till next week, enjoy the cuteness for now!