by RoxyPosted on January 10, 2021 Posted in Knitting 2 Comments

Despite my best wishes and hopes, the start of 2021 was far more eventful than I wanted. That said, it wasn’t all bad!

The worst part was that, as I suspected, we’ve been put into lockdown again. So no school for the terrors, but unlike last time, I’m not on furlough. Cue many sleepless nights, much stressing and general feelings of despair. But, it all worked out. Both myself and Engel have been deemed as critical workers and we have secured places for both Terrors at school and nursery.

On a better, eventful note, I was surprised by a review video of my knitted Escher Ganger!

You can watch it here!

More eventful news, I won a toy pattern and two sweater patterns through the Wild Knitting challenge! I am really looking forward to doing some knitting for me, but I really need to reduce the stash before I can justify buying two sweater quantities of wool! I’m working on it, managed to burn through 6 balls this week!

In less eventful news, I have managed some spinning for one of my big projects, been plodding away at my year long project and finished a quick little one for Engel just last night which I will share now!

It’s Snorlax! Engel demanded that he get a Pokémon hat after Felix’s Eevee hat and Inklings Meowth hat, so I asked the kids what Pokémon I should knit for him and within three seconds, the answer was Snorlax!

Now the kids are demanding I should make one for me, but there are just so many choices… Gengar? Wooloo? Purrserker?

Till next week, stay safe!

by RoxyPosted on October 31, 2020 Posted in Knitting 2 Comments

I received a challenge from my frenemy Ed Skar (watch the ordo redactus at the end of episode two – the last ten minutes – and you’ll understand), and it went like this:

@foxymitts knit me an Escher XD

Not one to back down from a challenge, I begun my research. An Escher in this instance, is not the mathematician and artist, Escher, but a faction in a war game called Necromunda, part of the Warhammer 40K universe/franchise. A friend at work happened to have some source material I could skim through:

so much inspiration, so many ideas, but after much though and discussion, it was paired back to knitting an Escher gangers ‘little sister’. And here she is:

The body is based on the free pattern Babes’ Little Sister by 123fionadolls McDonald (wasn’t the name fitting?!) Oh, and here’s another photo from the other side:

And of course every lady needs a weapon suiting for the fine art of war:

(It was supposed to be a lasgun but came out a heavy stubber- what can I say? (Walk softly and carry a big gun. – Engel) I think girls look cute with oversized weapons! She does also have a more moderate sized dagger tucked into her overskirt)

I think I can safely say challenge complete!

In other news, not much spinning this week, though there are a few knitting things in the works. Crumble is almost entirely back to her old self, just need some more weight on her still, and that’s about all.

Oh. I should mention that last week, due to the current Covid restrictions, my grand plan to have a day trip and meet Rabbie half way were scrapped, and I had a sulk. A big sulk. My first proper sulk since the start of all this chaos. And Engel, bless him, got me a present. 15 miniskeins of the most awesome hand dyed yarn! One is in tropical fish colourways and the other is ‘adventure bike’ colours…which he has batted his eyelashes at in the hopes I will left my sock ban and make him another pair…after mine though!

by RoxyPosted on July 26, 2020 Posted in Knitting 2 Comments

A commission from a friend whom paid me in wool, and then some more wool!

This is a 40k inspired dice bag for him, he’s a Chaos Marines player, and they worship Khorne, so one side has his symbol (above) and the other…

I do love knitting dice bags, and all if them use the free pattern Cthulhu Dice Bag! by A. A. Leavitt-Reynolds for numbers. Engel created the charts for this particular bag however.

In other knitting nephew’s, I have a few knitting projects done or near done but gave just taken on a rather big undertaking so will feed you those week by week whilst I’m busy with that project.

There’s been no spinning or dying this week – I have been ripping apart the conservatory in a bid to create more space, it’s been hard work!

This weekend we’ve managed a few social distance play dates, and j am loving being with other people – i’m an introvert, but lockdown has shown me that I do need others company on occasion!

Short post today as I am shattered from all this socialising, and I’ll see you all next week with my just completed project – but no more spoilers as it’s a surprise for someone!

by RoxyPosted on November 30, 2015 Posted in Gaming, Knitting No Comments

It all started with this one: Free pattern – Cthulhu Dice Bag by Arcana Vitae – though I worked this one, and all of them, on 3.75 mm. This is one of about…10? Different colours of cthulhus, backgrounds, eyes, i-cords…

But after my first, I quickly started to use this pattern as a a base and any chart I fancied with it. Or fish? (Engels chart this time) (This is based on the free pattern Binary by Christine Domoulin, and this particular bag is coded, it reads – EngelCRLF – the CRLF is the command for carriage return, line feed. Think typewriters!

More geeky? How about the Aquila logo from 40K? 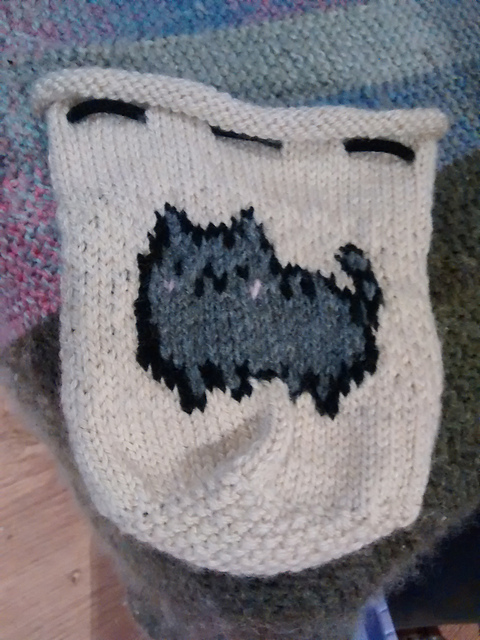 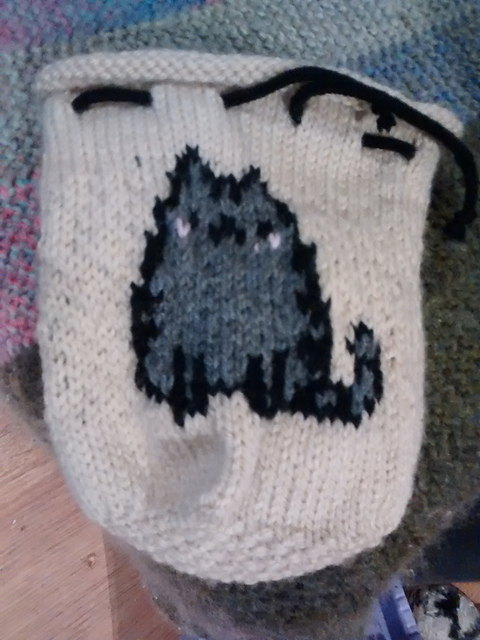 There’s been more, a VW campervan, fish bones, the 40K ork logo to name but a few, lots get gifted before I get a chance to photograph them!

I have a tradition with gaming group friends in particular – the first birthday they celebrate with the group, they get a dice bag. *Shrug* Its just one of those things. Pusheen was the one I made the other week, the VW campervan the one before…who knows what next! Though I am tempted to make me a new cat one – the red and black one at the start of this post is mine, before I was confident with color changes and patterns, but part of me think I’ll lose all my awesome dice luck if I do…

Till next week, and happy St Andrews!