RoxyPosted on August 22, 2015 Posted in Gaming, Knitting, Updates No Comments

Yesterday was my birthday. Its generally an occasion I celebrate at home, generally pretty small, and usually with very little fuss. My circle of friends however has grown quite a lot, and not the kind of friends you hang around with cause they work with you or whatever and its convenient, proper friends.

And I take my hat off to them. Best birthday ever.

I mean, seriously, how many people out there would toss aside their usual inhibitions, put on cat ears and tails and play Cathulhu (yep, Cat-thoo-loo) just because they know its what you kinda really want to do but not really want to make them do cause its just a bit mean? 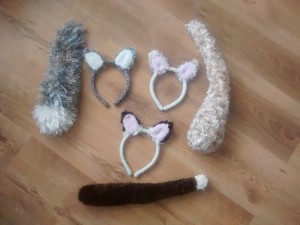 (That’s what was left this morning, I made more, but they went home with their new owners! No pattern, just winged.)

They even organised one of the others to GM so I could play (I was polydactyl calico cat with a fair bit of 1920’s streetwise attitude and those thumbs of mine could open doors and windows…it was awesome.)

They also spoiled me rotten (not important, but I was worried they were fed up with my GMing Cthuhlu and seeing the pile of Cthuhlu scenarios I got and expansions, not so worried!) and made me an awesome cake! 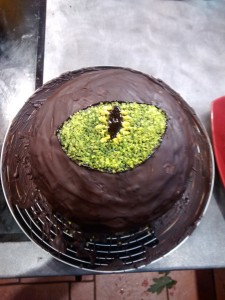 Three layers of super yummy chocolate cake, tons of yummy frosting and 90% cocoa on the outside…gorgeous!

Other thing that made my weekend? I got pounced on by Felix in my bed, she was wielding an amazon box and yelled ‘Happy Birthday Mummy! Present! Can eat monkey cake now?’ Sarah Keens Noahs Ark was the present, but that moment in time? Priceless – the girl takes after her mum most definitely!

Only used one ball of wool as, like I mentioned on the post last week, only little projects! Lots of ears and tails!

Hope everyone else has had as awesome a few days as I have!