RoxyPosted on May 21, 2017 Posted in Knitting, Little one, Updates 2 Comments

As promised, a bit more of an explanation as to my last post.

When Felix was born, there was complications. Lots. End result, emergency c-section. With Inkling, because of prior complications, we knew he would have to be a planned c-section.

Due to complications during my pregnancy the consultants decided that Inkling​ wouldn’t be removed at the previously planned 39 weeks, but two weeks early, with less than a weeks notice and some horrible, horrible steroid shots…

Ok…problem. Engels parents who were going to look after Felix for us, where on holiday that week. My family are 300 miles away and have their own commitments.

Time to bank in on the good favours of others!

Thankfully, two people really helped us out, and as thank you gifts (and severe nerves/nesting energy) I whipped up these guys: 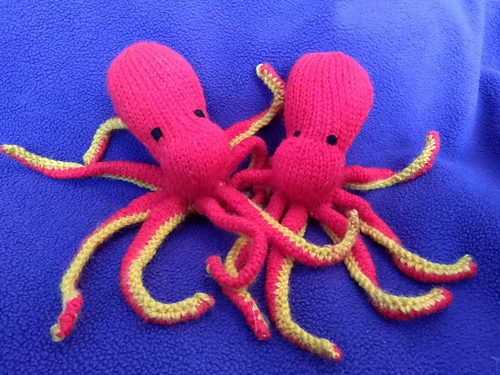 ‘Octopus’ by Hansi Singh from her book ‘Amigurimi Knits’, you may recall this is the pattern used for Inklings first knitted toy – the blue ringed octopus.

Seemed fitting, and they went down a treat, as did the Thank you cards Felix made, and cat pompom keyrings she made (though Engel had to get the glue gun out once she was in bed as PVA does not hold pompoms together at all…)

And that’s the story, in a nut shell, not much on the details but some things are best left unshared!

Inkling is doing really well by the way, and we’re all happy at home, though very tired!

In other knitting news, I have a large project still on the needles but progress…yeah…that’s down to a crawl…ah well, I have an adorable, happy, whole little family to enjoy in, I think I’ll just go and enjoy them some more before I pick the needles back up…

On that note, blog posts for the foreseeable future are probably gonna be sporadic, will try to keep to my every Sunday update, but I make no promises.