RoxyPosted on June 11, 2017 Posted in Cats, Knitting, Little one 2 Comments

I can’t believe it’s been three weeks already, since my last post, since Inkling arrived, and that it’s taken so long to finish my current knitting project!

That said, this project rapidly grew in number…let me start from the beginning.

We got a fishtank, last summer, and it’s essentially cat TV, the cats will watch it for hours, and Felix kept dragging blankets off the sofa to sit next to the cats to also watch the fish tank…so I decided the fishtank needed a mat in front of it.

The ‘Kitty Placemat’ in ‘Kitty Knits: Projects for Cats and their People’ by Donna Druchunas to be precise, just bigger. (I’ve used the fish motif before) Showed it to Engel who pointed out that the actual cat bowls could do with little matching mats as well, with spares so they can get washed.

So I went from one, to five. Engel pointed out the fishtank should have a spare as well (fishtank mat is twice the size of placemat)

So one to six, ok. He then pointed out that when we get cat number 3 (Salem was his cat, and he wants his own little cat buddy again) it’ll need a placement and a spare.

So that’s one to eight.

Eight! And I agreed! Clearly baby brain got the best of me! 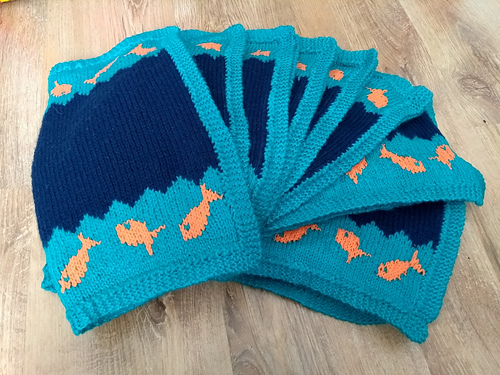 Look awesome though, don’t they?

Now onto the next project! Which will be getting fitted in between feeds, sleep deprivation, energetic three year old, demanding newborn, housework, arts and crafts, cooking, baking…

I can see where those three weeks went…