Packed his trunk and said goodbye to the – wait, that was Nellie, this is Elmer: 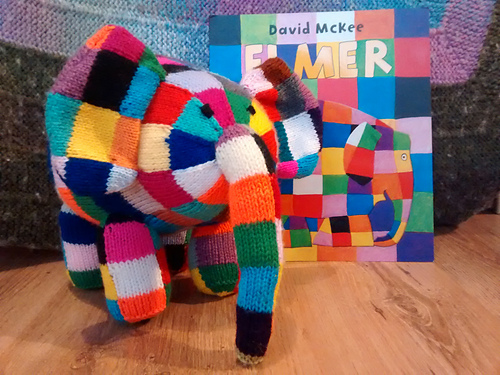 Technical details first – I followed the ‘Eddie the Elephant’ pattern by Ann Franklin from the May 2015 edition of ‘Love Knitting for Baby’s.

When I saw it last year, I knew it would be used to make this project. Took getting the actual books and for Felix to give me the puppy eyes to have it jump the knitting queue and get made!

(For those who don’t know, here’s the Wiki link to who/what Elmer is all about)

I’m 99% sure he’ll be remaining as a one if a kind knit by me though. He was actually very easy to knit, and to sew, but all those colour changes…

Would happily reknit this plain, or in just two colours, but this won’t be getting remade until the memory of those colour changes has been forgotten!

I managed to use up quite a few of my tiny scrap balls making him, but only four where part of the wool count (when I get to less than 5g of wool, it’s counted as used and moved to the scraps box, so all bar four of the balls of wool I used in their entirety have been counted as finished previously)

Without further ado, the wool count!

3 comments on “Elmer the elephant”