by RoxyPosted on April 6, 2019 Posted in Gaming, Knitting, Uncategorized 2 Comments

I’ve been playing Fallout76 lately (I know, I know, it will never compare to the glory of Fallout 3, but it’s been a nice, bumbling play, and with the daily quests it provides a nice goal to complete each night when I don’t have time to push on with serious plot)

Anyhow, for those not in the know, it’s a computer game based in a post apocalyptic future where you have to wander and kill and collect to survive. It’s also filled with silly little things to lighten up a rather dark and unpleasant setting.

One such thing is Mr Fuzzy. A rather creepy looking mascot to a now abandoned and rotting theme park. The little toys (and so many varieties) are everywhere!

And of course, after scrapping so many for material and leather in game, Engel decided he wanted one to keep…

It’s supposed to be creepy.

Definitely one of the ugliest creepiest things I’ve made. Maybe about equal only to the naked molerat…another Fallout knit…

For those curious, I heavily modified the free pattern Basic Body by Sara Lee and until I did the face, it was actually looking really cute!

No change from last week’s wool count so won’t include it this week.

Tagged with: cats, Engel, Fallout, Knitting, Mummy can make that!

by RoxyPosted on February 25, 2018 Posted in Gaming, Knitting, Little one 1 Comment

Two completed projects this week. Let me start the first with a bit of an explanation…

Anyhow. One of his most favourite is Fallout (depending on his mood depends on whether it’s Fallout 3 or Fallout 4, but that’s semantics) and watching him play through the nth playthrough of one of those two, I spotted this:

And I commented that wouldn’t it be cute if Inkling had one of those…Engel looked at me, with a look that I know far too well…and so the hunt for a pattern began!

This was made using the free pattern: Mini Knitted Rocket Ship by Ilana R. Marks and although incredibly cute and awesome, needed a few tweaks to get them a bit more like in the game…

Lengthened the centre part of the rocket, added some extra windows and voila! Now I just need to turn them into an actual mobile…when I do, I shall photograph it and let you all know!

The second completed project is no less geeky than the first. Felix was playing with her cat puppet I made forever ago, and it was having a conversation with her cuddly toy Meowth (her favourite Pokémon for those curious). After watching this adorable exchange an idea took route in my mind and refused to shift until it was knitted…

A Meowth hand puppet! I used my own free cat hand puppet pattern and added a number of small additions and a few tweaks and voila! I may publish my notes so that more Meowths can be created to conquer the world! I am also debating knitting a few other Pokémon hand puppets and if I do I’ll probably put all the pattern notes together and post it under one pattern…not sure yet…need to think on it and see if inspiration strikes…

Anyhow! In non knitting news, tomorrow is my first day back at work after maternity leave! Every time I think that I just want to cry…

Updates will probably be a bit patchy for a while until I get back into the swing of things. It currently up for debate as to whether I will actually get more or less knitting time…

Of Mole Rats and Eye Patches

by RoxyPosted on June 19, 2016 Posted in Knitting, Little one 2 Comments

Now that has be the oddest title yet for one of my blog posts.

But there is indeed a mole rat and an eye patch!

Let’s start on the ugly one. No, really, it’s ugly! I knitted one of these: 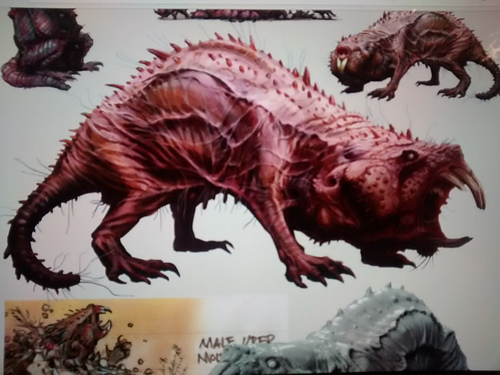 (Image from the Fallout 4 artbook) it’s a mole rat. More specifically, the mutated, diseased mole rats found in the computer games Fallout 3 and 4. These are awesome open world games full if all kinds of horrors, set in a post nuclear 1950s-esque world.

Engel loves the game. He’s pumped a crazy number of hours into both of them to, and he demanded I make him one. 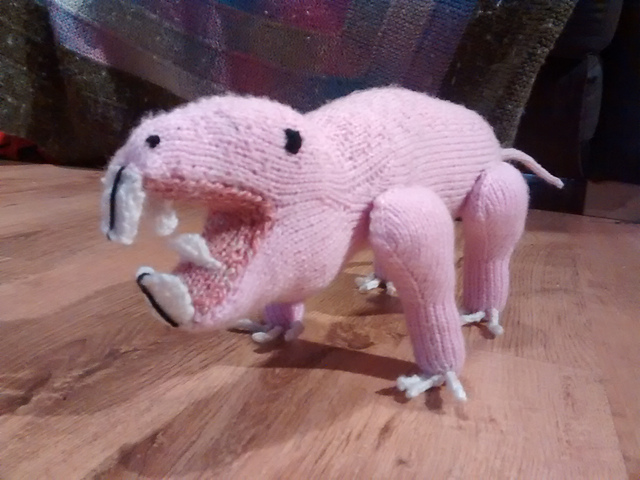 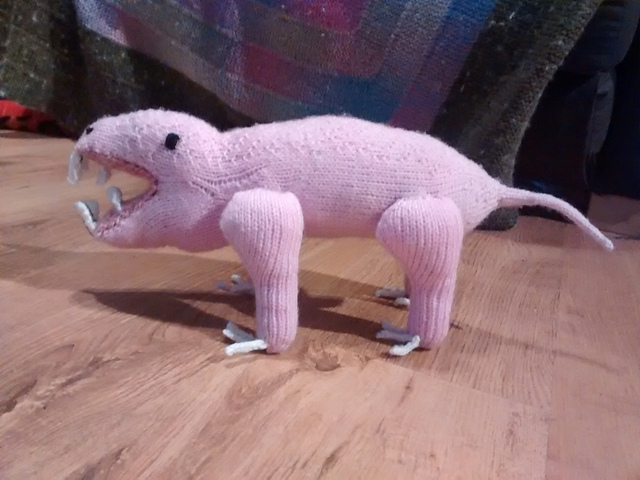 I butchered the pattern ‘Mole’ from ‘Knitted Woodland Creature’s’ by Susie Johns for this one. I also kept extensive notes (for me) on what I did to if I ever make another – it’s on my Ravelry project page.

Engel is delighted with it, so job done. Though he wants it to wear a little belt with mines on it…it’s a Fallout 4 thing. 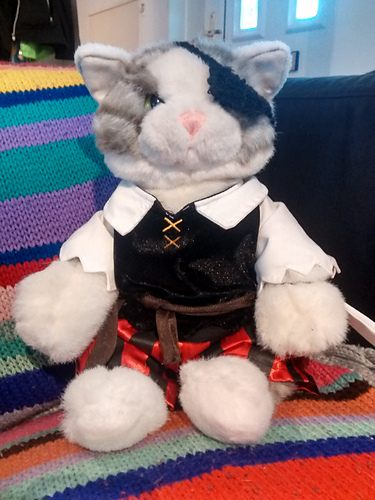 Time for a story.

Before Felix was born, Engel obtained a toy cat that, after some joking around, was called Captain Morgan of the seven sofas!

Cue a few years down the line and Felix acquired Morgan. We told her of his mighty adventures as a pirate Captain and she demanded he had an eye patch.

So we dug one out.

Next day she lost it. Was very upset and wanted him to have another.

So I made one. Coincidentally, his pirate costume arrived. If asked, I’ll say that Felix wanted it, and it wasn’t Engel at all that insisted Morgan just had to have one…

Other knitting news: I have two projects on the go this week, both to be done by Saturday. I have a habit of tight deadlines these days it seems…and despite all my knitting, no whole balls of wool used either this week. So the wool count still stands at: