Following on from Flopsy Rabbit, I’ve now made… 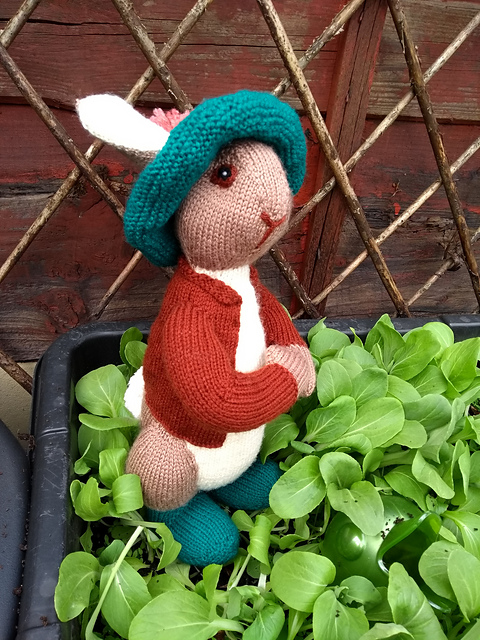 Benjamin Bunny! And what a little rascal, eating the pak-choi!

The pattern is Benjamin Bunny by Alan Dart, and like Flopsy, it’s very well written and pretty easy to knit, but the sewing! So much sewing!

That said, I’m a glutton for punishment and plan to cast on for Peter next, though I have a few smaller projects to fit in as well…more on those when I’ve made them, or at least have something to show you all!

Just a quick post this week, it’s been a pretty busy week with work and the little ones, and there was some drama as something’s taken a chunk out of Ziggy’s tail, but it’s all been cleaned and bandaged and despite the dirty looks she’s been given me, she’s all fine now!

Though I suspect she’s had her revenge as last night, I jumped up and landed on one of Inklings wooden blocks, and subsequently have a chunk of my toe missing…so much pain…

We’ve also been doing most of the activities at the MOSI today (Felix was deemed too young to be allowed to do any soldering, much to her daddy’s disappointment!) but she did manage to convince the poor chap running the 3D printers to let her have the space invader charm he’d just made as she recognised it as something her daddy likes…

See you all next week, where I’ll no doubt be even more worn out as it’s the school holidays and it’s all me and the terror days subsequently! Now, to Pinterest for ideas on what to do that are fun, educational but not going to destroy the house…