Oh I do love to be beside the seaside…

by RoxyPosted on April 11, 2022 Posted in Knitting 2 Comments

Remeber how I said last week that it was a short post as I was super busy? Well, sit down, grab a cuppa, and let me regale you on my adventures.

Last Monday saw me in Wales, we had arranged last year to have an Easter holidays trip there with my good friends J and S, their first date and his eventual proposal to her took place in Cricceth and all of her childhood holidays were in Wales.

I was flattered that they invited myself and the whole family to spend a week with them, though I was also worried that they had bitten off more than they could chew with having my two little terrors in tow…

After watching my two use S as a climbing frame and then make a sand dragon with him, I knew this worry was unfounded. Only three days after the holiday and they’re already trying to organise the next with us so clearly it was a good holiday for them!

There was a beach trip every day, the weather actually held long enough for this every day to my amazement, with sand dragons and sand cats and rock pooling (Engel found several fish, crabs and shrimps) and of course, shell collecting. I managed to find the perfect one, shown in the photo above, as a button for my sea urchin inspired tea cosie.

The ball of wool that I mentioned that I had purchased on Monday was for this very project – I had spied a naked teapot when rummaging around the cottages cupboards and my terrors had spotted a dried sea urchin on the shelves. Some banter later and I was convinced to knit a sea urchin tea cosie as a thank you gift.

I winged the pattern in the end, but it was initially based off a free Ravelry hat pattern Sea Urchin by Robin Celli

Other activities in Wales was the rabbit farm (I fed alpacas, and managed not to steal them!) Lots of beach visits, some rambling, the slate museum, two different little mini railways and a visit to the Naked Spinner where I bought some very nice coloured fleece…

It was sad to see the holiday end, but it was immediately followed by a wool show near Mrs Ratman, and I only walked out with 6 balls of wool. I showed great restraint!!!

However…I may have just found out that I had won a prize draw that I entered…when that arrives, I’ll go over it then.

There was an Easter trail yesterday with another friend and her little one which knackered me out…but the kids had a ball. Or an egg?

One other thing happened this week, but that is something I will go over at a different time.

Till next week, take care!

by RoxyPosted on March 18, 2016 Posted in Knitting No Comments

Still plodding on with my blanket – having a little saga with it, but more on that when I post about it…

It’s been a fairly quiet week all in all, used up one ball of wool, done lots of work, Felix has been up to no extra mischief than normal…though the weekend should be fun, but let’s see how that goes before I go on about it!

So, when there’s not much to say or show, it’s time to hit the knitting archives of things not on this blog yet!

I posted, back in November 2013 about my commissioned Scottish hippo teacosie but no other tea cosies have appeared on my blog. And I’ve made lots. Like dice bags, there’s a certain charm to making tea cosies…but they’re something that’s nearly obsolete to most people. I do own a pair of Teapots, but my sister Rabbie owns a whole collection…I’ll try and get a photo of it some time! 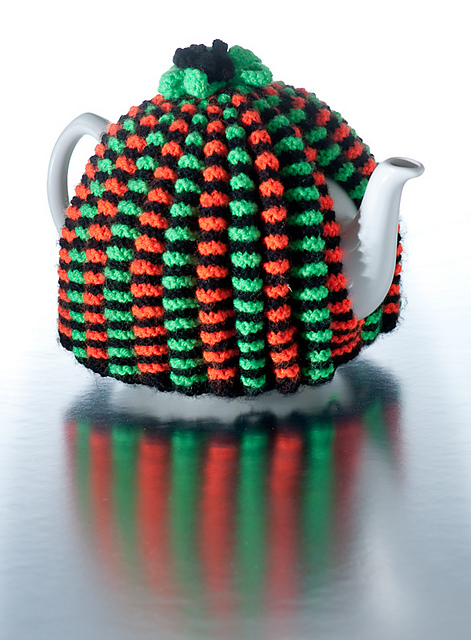 Grannies traditional tea cosie, free pattern by Keren Smith – this one is not in traditional colours (the orange and green are both UV reactive and will glow under a black light) but it’s a lovely design that never fails. I’ve made half a dozen or so in different colours for people, usually to match their kitchens!

After a few I was inspired to make this using the same pattern, just the one colour, and a few added details…

Cactus teacosie! This was a present for the father in law, who loves his cacti, and I will say now, I’ve never known a knitted thing to be used as much as this has. Everyday since February 2012, and several times a day at weekends, this gets used.

My in-laws are big tea drinkers.

And as an aside, nothing makes a knitted happier than knowing their knitting is used/loved to the point of repair. That base and the flower and the seams have all been redone several times…

Anyhow! Before I digress further, one of my own creation, for my mum this time; 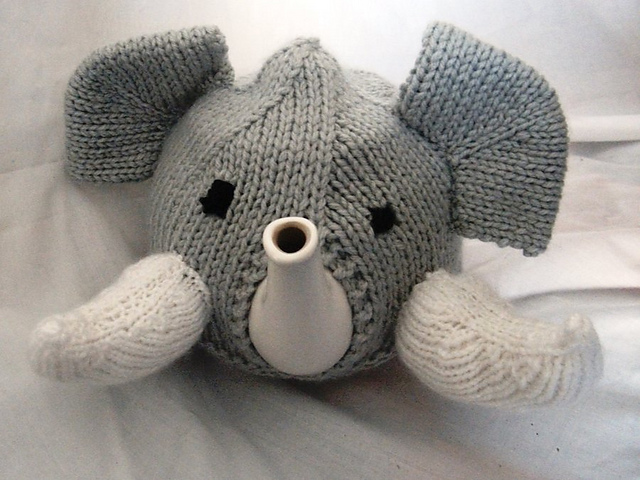 She loves elephants and wanted an elephant tea cosie, but didn’t like any I showed her, so she told me to make my own up. It boggles that the woman who taught me to knit thinks I can do a better job than her (maybe on toys, but baby stuff? No way, never ever…)

And last but not least: 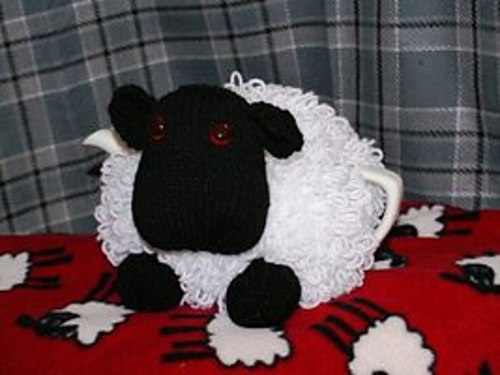 ‘Sheepish look’  by Caroline Lowbridge. The pattern is from ‘Tea Cosies’ to which I own books and and two…again, this is a pattern I’ve made a dozen times or so – I make it for myself and before it’s even done, it gets thieved…always with permission mind you…it’s hard to say no sometimes…

Alright, hopefully next week I’ll have something new to show you all!

by RoxyPosted on November 20, 2013 Posted in Knitting, Little one 1 Comment

I have no idea where my time has gone! (Probably swallowed somewhere between chores, Felix, knitting, socialising, dreaded dentist and trying to cram some sleep in somewhere)

Another busy day today so I’ll be brief, past few days I’ve been at the dentist (getting a crown fitted soon so it needs drilled and readied) spent some time with Little Felix and her Grandmama and grandpapa, visited my boss and her baby as well as her parent group, visited a different parent group near me, went to work for a flying visit – Engel had a contact lens disaster – and…there was more, I’m sure…

But on to the knitting portion! 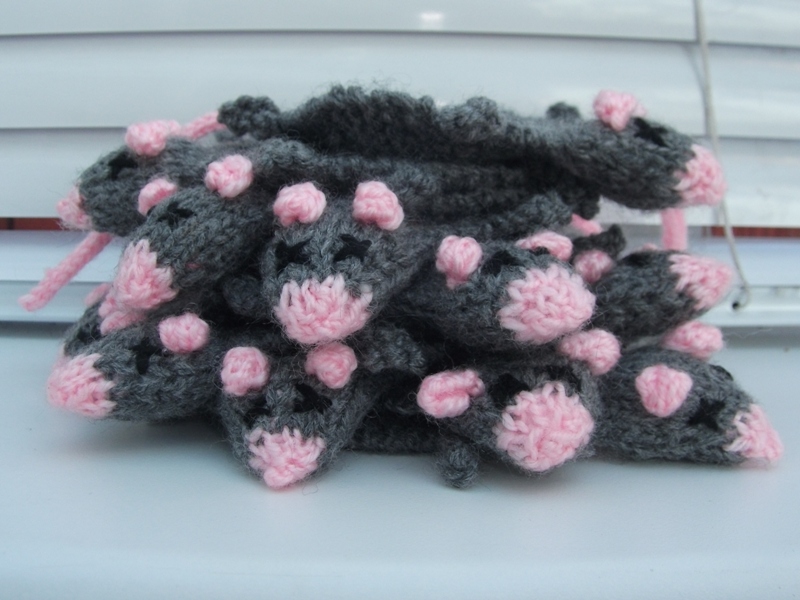 Which can be found here. I’m addicted to these – cute and quick to make! And who cant laugh at a squashed rat for a bookmark or coaster? 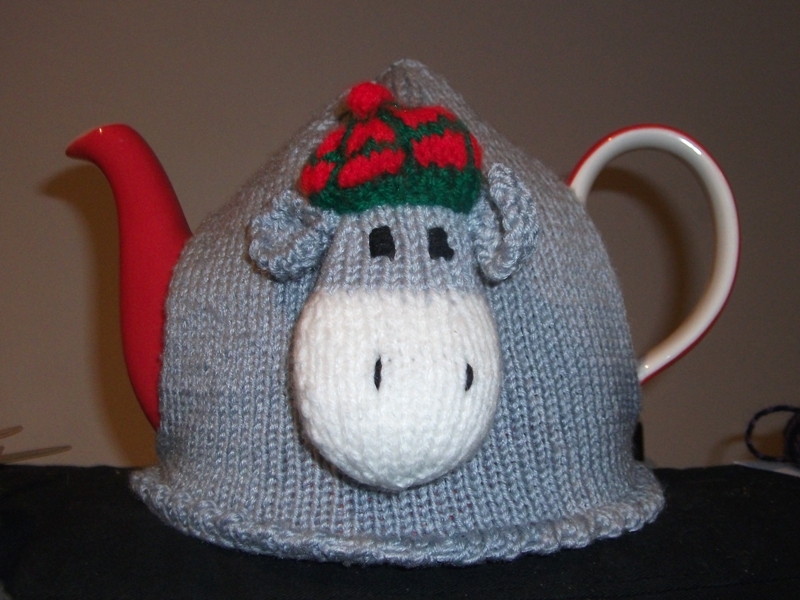 And lastly, this guy! I was asked to do a commission for a very nice person as a present for their friend with the instructions of, ‘she’s Scottish so it’d be nice to incorporate that into it, but she also really likes hippos.’ So I made a hippo wearing a tammy hat, i did try the stereotypical ginger hair, but it made the finished item look…odd. so I left it off.

Fingers crossed she likes it!

Well, thats all for now. Felix needs to go to the clinic to be weighed and measured, then hospital for her BCG, after that meet up with Engel for dinner before my knit club. Hopefully Felix will behave if I give her a ball of wool for herself…7 weeks isn’t too early to start their love of wool, right?