by RoxyPosted on April 11, 2021 Posted in Knitting 2 Comments

Hello everyone, if your like me you’ll be lamenting the long easter weekend now being a distant memory, and the warmth and sun we had then too…seriously, it keeps snowing and its definitely spring.

In part to bring some of spring inside, but mostly because, well…

My little terrors gave me a chocolate rose on a little plastic stem for Mother’s Day, and it was really cute especially as I hadn’t expected anything. The sentimental part of me wanted to keep it…but the glutton in me also wanted to eat the chocolate…

Who says you can’t have your rose and eat it?

Its from a free pattern, Rose by Libby Summers, and knit with my own handspun. The reason for the pink wool is to continue my quest to knit all my kitties – the ginger ninjas Outbreak and Lockdown are next on my list but one ginger cat looks much like another…so their collars will be different.

But that won’t be for a while as I have some very fun yarn I’m playing with at the moment as part of a gift for Rabbie for just being awesome during this time of plague.

In other news, I went through my wool stash today with the ‘help’ of my terrors and one of the felines, and counted a lot more wool than I thought I had. Let’s just say it was about 100 out. I’m choosing to say the maths was done wrong, or the counting, due to my ‘help’ and will therefore continue with my current wool totals.

And on that note:

Wool used – 50 (10 this week)
Wool bought – 0
Wool given to me – 21 (MIL ripped out a jumper I made for FIL many, many years ago as he has lost a of of weight since then, so its made its way back to potentially be turned into a slimmer one. I really didn’t have the heart to tell her in could have just taken in the existing one and save myself the job of knitting one…)
Wool gifted to others – 1
Wool handspun – 8

Not quite, but Yesterday the 8th of May, marked the 75th anniversary of VE day.

A little history: Victory in Europe Day is the day celebrating the formal acceptance by the Allies of World War II of Nazi Germany’s unconditional surrender of its armed forces on Tuesday, 8 May 1945, marking the end of World War II in Europe.

And for this big event I had knitted a whole bunch of poppies. That were never used as the event was cancelled due to Covid-19. (Pattern used was the free pattern knit flat, no-sew poppy by Suzanne Resaul)

But life continues, and my mum asked me to knit up a few baby things for a colleague who was expecting her own “little ray of sunshine” so with that to go on I made these:

Does anyone else think it screams sunshine? Managed all these in a day and posted them the following. Which was good as the little ray of sunshine arrived yesterday, 4 weeks early!

Patterns used are ‘Rainbow’ and ‘Sun’ by Sarah Keen from her book “100 little knits” and ‘Beautiful Bootees’ by Sue Whiting from the book “Cute knits for baby feet”.

I shall leave you all there, not much has really happened here apart from baking and playing and home schooling and child wrangling and adventuring and gardening…oh, and I dyed some wool and some fluff for spinning…

There are two parts to today’s post, the silly and the sad.

Let’s do the silly first. Last post I mentioned that I needed to knit something for Flopsy Bunny’s basket, and despite the severed head of Mr McGregor being the most popular choice, I went for bunny edible flowers.

First of all, a dandelion! The pattern is Chrysanthemum (knitted) by Lesley Stanfield from her book ‘100 flowers to knit and Crochet’ (I just tweaked the pattern a tiny bit and worked it in yellow to make it a dandelion)

Also from the same book, Lavender!

And lastly, chamomile! This one is based on the free pattern: Gerbera Daisy by Jessica Goddard.

Want to see them altogether in the basket? Course you do!

And now, on to the sad part of this post. The woman who ran the knit club I attended has, unfortunately, lost her fight with cancer. Her funeral was on Thursday and was a very lovely, dignified affair, with many, many, knitting related puns. They had us in stitches.

I wanted to give something, and traditionally that would be some fresh cut lillys or some such flowers. But I didn’t want to buy flowers that would just wilt and die within a week or so, I wanted something more permanent, like the impression the recently deceased had left upon all who met her.

A free pattern, The Good, The Gilded, and The Goth by Heather Broadhurst. It’s a very nice, clever little knit, that I would love to make again under more pleasant circumstances.

That’s all for this week, it’s been busy, with lots of ups and downs and now quite a heatwave that’s sapping what little energy I have left.

No wool count as no changes since last week.

by RoxyPosted on December 24, 2017 Posted in Knitting, Little one, Uncategorized 2 Comments

by RoxyPosted on November 20, 2016 Posted in Knitting, Little one, Uncategorized 2 Comments 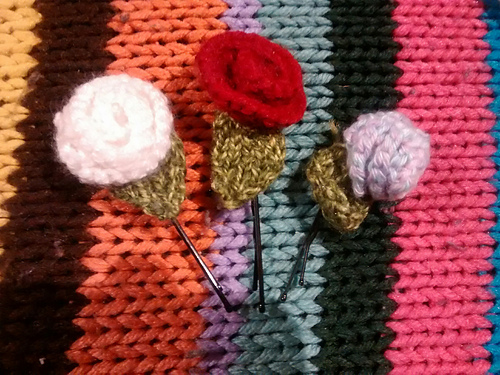 After finishing the Christmas knitting (hooray! But sadly still having all the sewing and finishing) I decided to whip up some of the cute Rose Pins! It’s a free online pattern by Sarah Kim Tenbuecken and it takes barely any time to knit and assemble.

I doubt Felix will entertain them but they were still fun to make. Maybe her much girlier ‘best friend’ (Felix has bestowed this title on her, it’s so cute!) will like them…

Anyhow, so Christmas knitting is done, just assembly, and then it’s a few additional bits and bobs which I can post up here as and when made without spoiling it for anyone.

Had a bit of an accident at work, nothing major, but I am working from home for a little bit, and it’s amazing how much more I get done when I can knit whilst reading through various articles, papers or reports. Shame I can’t knit and type up manuals and my own reports though…

Oh, and for those who asked last post, I have unfortunately not been able to photograph Frankenstein’s shapely derriere (as mentioned last post) as A Felix has been dragging it around everywhere and I can’t wrestle it off her when she’s sleeping either…next post I shall try! And make him trousers too. Haven’t managed that either.