by RoxyPosted on July 21, 2019 Posted in Knitting, Little one, Uncategorized 1 Comment

As mentioned area weeks ago, I’m trying to take up spinning and make my own wool. It’s slow going, mainly as I have a lot of fleece that needs washing and carding before I can try spinning, but it’s there.

One thing I need to do all this though is a drop spindle. Before going to the wool experience where I ended up picking up three, I organised a trade:

A beautiful, 3D printed drop spindle (this photo was taken before I attached the hook) in exchange for:

A little knitted replica of his recently deceased kitty, Minnie.

(Pattern used is Tortoiseshell Cat by Sally Muir and Joanna from the book Best in Show: Knit Your Own Cat)

Even though I used a pattern, the markings where all done by eye to match up, as best at I could with wool, the markings on the actual cat. I had six very cute reference photos for the job!

And even though I now have four drop spindles, this newest addition is just lovely to work with…well worth the effort! Though I don’t fancy trying to match Calico cat markings again any time soon!

In other news, I got a little table top loom for Felix, which has been surprisingly fun! She’s finished a bag on it, though I have yet to cut it off, and currently starting a wash cloth for her grandmama! Looks like creativity is running in the family! Photos will come soon once I’ve got them off the loom and all the ends weaved in.

That’s it for now, has been a very busy week at work and at home and an absolutely manic weekend with playdates, christenings and birthday parties all to attend…

Oh, and as I’ve had a few private enquiries regarding last week’s blog post, my sister’s brother in law survived the operation so it’s now just the long road to recovery. He’s not fully out of the woods yet, but definitely over the worst! And the knitted hugs went down well, and didn’t over step any boundaries, so very, very pleased with how it’s all worked out!

by RoxyPosted on July 6, 2019 Posted in Knitting, Motorbike, Uncategorized 1 Comment

The title of this post has definitely given the game away over the knit to show you this week!

This is made following the pattern Siberian Husky by Sally Muir and Joanna Osborne from the book Knit Your Own Dog: Easy-to-Follow Patterns for 25 Pedigree Pooches.

The reason behind this cutie is based on the events that occurred the other week, which I mentioned in this blog post.

Said very lovely person also owns four huskies and a collie. I got lots of doggy cuddles that day. And as a thank you for helping us out for near enough a whole day at incredibly short notice, literally the night before, Engel suggested I make a replica of one of her huskies. 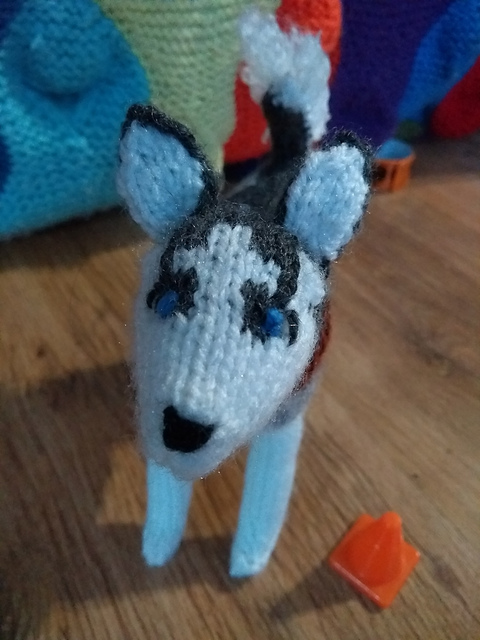 There may be the rest of the pack on its way eventually, I believe that’s in debate…

In other news, today was The Wool Experience! And my friends Sisterex and Charisobelle have convinced me to pick up spinning as a new hobby. Or to at least try it. So I went to get a little bit of sheep fluff and a drop spindle.

I now two whole fleeces, 5 little sample bags of different fleeces and 3 drop spindles. Sisterex also gave me three lots of commercial fluff I gave her the other year as it wound up in my stash by accident and Charisobelle also gave me three little bags of fluff in different washed stages so I could see the differences each step made and could practice on those for washing myself.

I think I need to learn this hobby, and get competent in it, pretty quick…

Oh, and I also picked up three skeins of undyed wool for me to have a play with my dyes some more…