by RoxyPosted on February 24, 2019 Posted in Knitting, Little one 1 Comment

Yeah…I’m not 100% sure how it happened, but I ended up trading a pair of these: 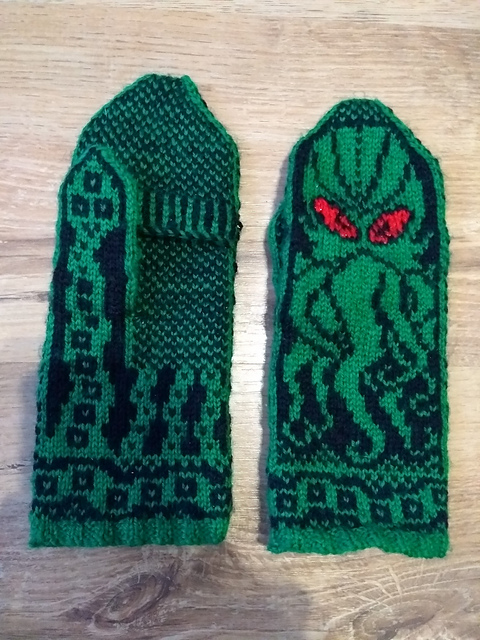 For a lot of custom 3D printed Nerf parts. I suspect it’s Engels way to get round the £10 a month budget I set him…

The mittens were handed over today whilst we were meeting people for a small Nerf event, (just a bunch of loons running around a field shooting each other with Nerf blasters that’s also family friendly, so Felix and Inkling could join in) and Engel received a box of parts.

Definitely think Engel got the better end of this deal, but hey, I got to knit awesome mittens again! (These are based on the free pattern Cthulhu Mittens by Lyle Stafford, however, this pattern is for basic mittens, hence mods to make them convertible!)

In other news, we went to Chester zoo to check out the Big Cats Lego exhibit (and of course the animals) and it was awesome!!!!

by RoxyPosted on March 18, 2018 Posted in Cats, Knitting, Uncategorized 1 Comment

I’m having a very strong sense of déjà vu…

But at least this post has no pesky crocodiles!

First of all, happy St Gertrude’s! As I mentioned last year, this is the day we celebrate our cats birthdays. Though with the ‘Beast from the East 2.0’ our festive spirits have been somewhat dampened as the cats are all in a huge sulk as they have the snow!

Onto the magic mittens, as I mentioned last time I made them, my friends little one has eczema and, after her eczema developed an infection from scratching during the night whilst her previous magic mittens where in the wash…

Well, I couldn’t have that! 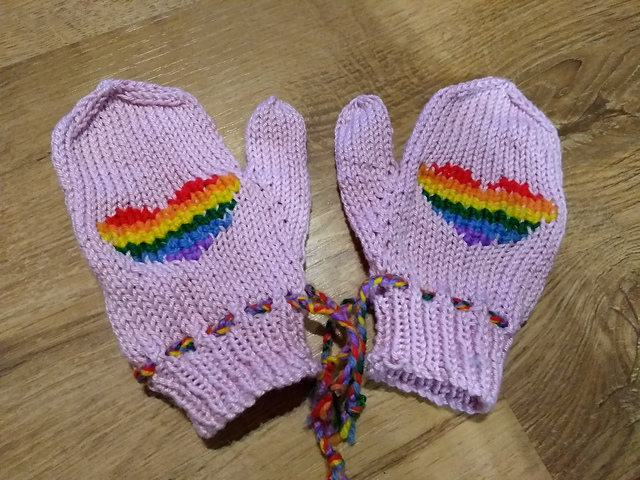 Pattern used was once again, the amazing free pattern The World’s Simplest Mittens by tincanknits, these are knit in the next size so there’s growing room. And when they’re in the wash… 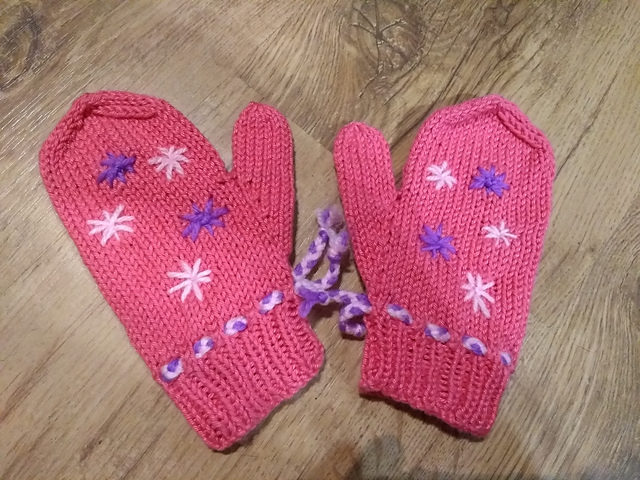 The patterns where picked by my friends little one, anything to help her wear them!

by RoxyPosted on March 19, 2017 Posted in Cats, Knitting, Little one 2 Comments

Let’s start with that pesky crocodile! 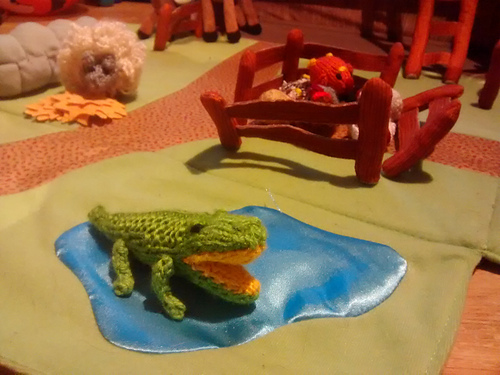 Photographic evidence of him prowling around the farms livestock… Felix has actually been having a ball playing with him as part of her farm, though she now insists that I need to knit some tiny ducks to keep him company in the pond.

Anyhow, cuteness aside, I just finished another little project: 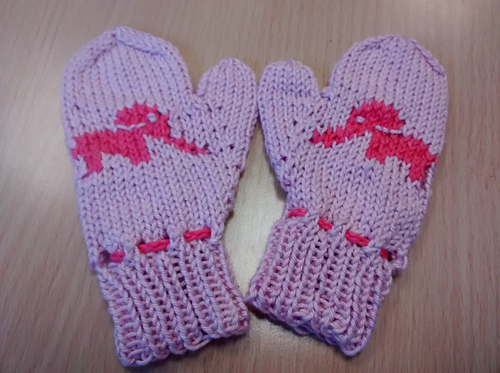 A pair of ‘magic mittens’ – I’ll get to the story in a moment, details first. The mitten pattern is a free Ravelry download called The World’s Simplest Mittens by tincanknits – and it’s true to its name.  There’s schematics for different sizes of mittens in all different weights, and it’s clear and concise. Definitely a keeper of a pattern. The elephant chart itself is from another free pattern – Elephant Hat – Child Size by Kathleen Taylor.

Story time now. My bosses little one, and Felix’s ‘best friend’ has really bad eczema. And of course, it itches. As a sufferer of eczema myself, I know just how hard it is not to scratch. She’s three. She wakes up looking like she’s been butchered in the mornings from scratching so much.

So, Magic Mittens it is! Lightweight cotton mittens in the colours she picked out with an animal of her choosing on them, and ties that can be double knitted so she won’t be able to pull the blasted things off.

I was made to wear wooly mittens as a child. In summer. These are a much kinder alternative! Fingers crossed they’ll help – if she can stop scratching long enough for her cream to work…

And last but not least: St Gertrude’s Day.

On March 17th, also known as St Patrick’s Day, it happens to be St Gertrude’s Day too. She is the patron saint of cats, gardeners and mental health. When we fostered cats, as we never knew their actual ages let alone dates of birth, it became habit to celebrate all the cats birthday on St Gertrude’s Day. This year, even though we know Dashi’s birthday, we still don’t know Crumble’s (we reckon she’s getting on for eight years old now!) so the tradition continues.

Felix was particularly happy to help celebrate the cats birthday, there was presents and special cat came too – tuna cake with salmon paste ‘frosting’. I personally think yuck, but Engel happily ate one of the spares and went on the prowl for more. Not that the cats lefts much in the end!

Total – 655 (So close to getting back to that starting total!)

by RoxyPosted on August 23, 2016 Posted in Cats, Gaming, Knitting, Uncategorized No Comments

This time last year I posted about how awesome my friends are. How they all donned on cat ears and played Cathuhlu all just for my birthday.

They out did themselves this year, and I have to say, my friends are more than awesome, they’re amazing!

I mean seriously, look at this cake! It’s the Necronomicon, as a cake!

It’s not the first amazing cake that particular friend of mine has made for my birthday, two years ago, it was this tentacular beauty! In case you haven’t all guessed, I’m obsessed with Cthuhlu. I’ve read all of H. P. Lovecrafts mythos stories, own numerous RPGs (Call of Cathuhlu, Delta Green, The Laundry, as well as numerous source books) I even created my own knitted Cthuhlu pattern!

It also happens to be my literally just now finished project: 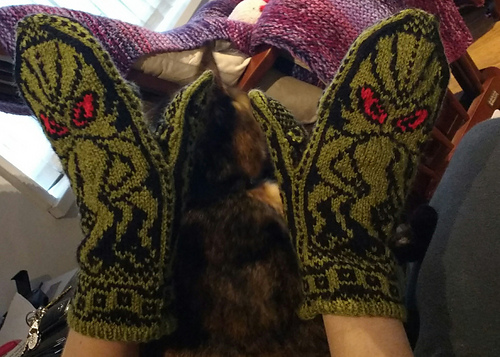 This is based on the free Ravelry download Cthulhu Mittens by Lyle Stafford. I changed mine so that I can, let’s say, rather than pet Crumble with mittens: 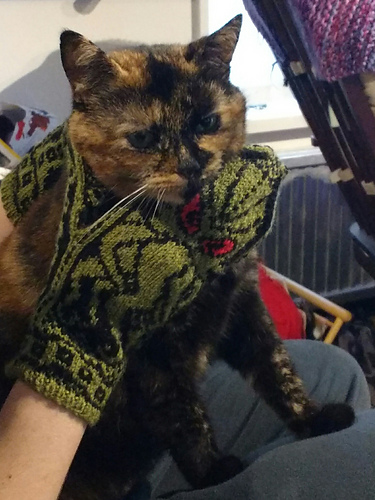 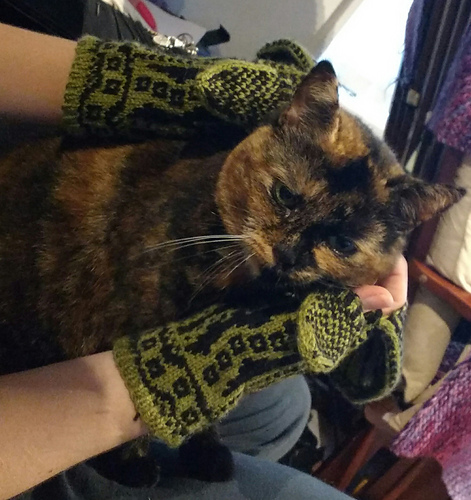 Scritch her with my fingers instead!

I sense more mittens in my future as I had a lot of fun with these, but there are other projects to be done first…so many projects, so little time…

In other news, I went to the pop up knitting show in Port Sunlight (as it was pouring with rain, good ol’ British weather!) And accidentally bought myself a very nice little ball of wool that was positively singing to be a shawl. So that is what it shall be.

And that is what will be in my needles next!

by RoxyPosted on April 17, 2016 Posted in Knitting No Comments

Does whatever knitting I can…

For some reason the spider man song leapt into my mind. Must be the sleep deprivation catching up with me! Work, being a mum, attempts of a social life and a house keeping have just killed me lately.

Have managed a fair bit of knitting though! 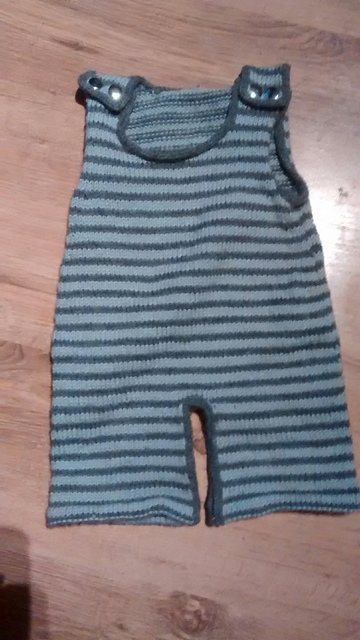 These were made using the free Ravelry download ‘Stripy baby dungarees’ by Becky Smith. This was a request from someone at work who is expecting their first grandchild – they asked for grey dungarees and this was the pattern I settled on.

I do like the two tone grey – its very soft on the eyes and gender neutral.

This is also the first project I’ve used a hammer on! (It was for the big silver fasteners – but still, a hammer! For a knitting project! Engel appeared to feel that my invasion of his sacred toolbox warranted him the right to ‘supervise’. Or maybe he doesn’t trust me with heavy tools…)

But that’s not all this week! More baby things! 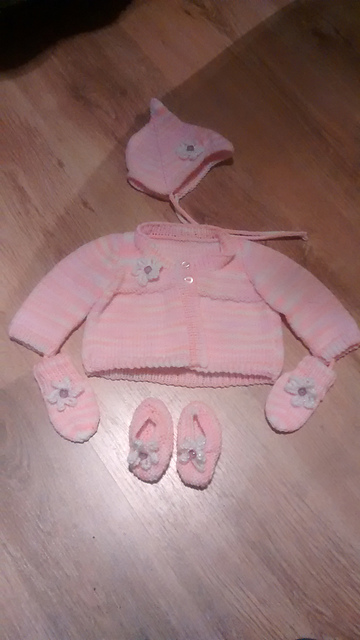 Lots of baby things! The cardigan pattern is ‘long or short sleeved coat with flower’ from sirdars ‘Beautiful baby knits’. (Got to love the incredibly unimaginative names!) The booties are from the same booklet, they’re from the ‘Sweetpea’ set. The hat is another free Ravelry download – Alfafa Baby Hat by Kate Gagnon Osborn. Lastly, the mittens pattern is a free online pattern ‘Wee baby mitts’ by Christine Vogel. Adorable! To tie the set together I added the flower from the cardigan onto everything. I think it’s worked out well.

Though I still have a ball of that wool left – maybe a matching cuddly toy?

Even more food and mittens!

by RoxyPosted on January 15, 2016 Posted in Knitting, Little one No Comments

Slight change of pace this week – I couldn’t leave Felix out after both myself and Engel getting armwarmers, so mittens it is! 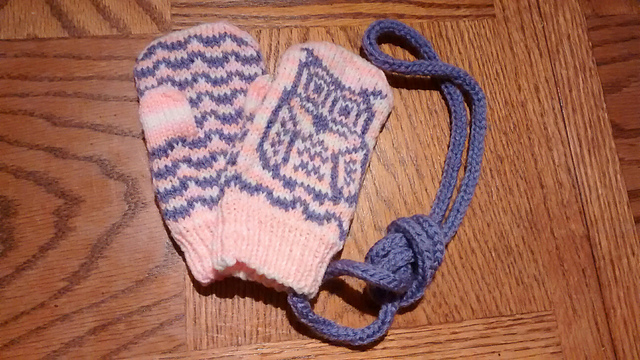 I used the free pattern ‘Owlet‘ by Odessa Reichel – though I did end up making two pairs as the first came out large enough for a 6/7 year old! Felix can have those when she outgrows the smaller pair (pictured).

For the food item this week I actually went old school and used one of my many knitting books – Amigurimi knits by Hansi Singh. Can you guess which pattern I used? Here’s a hint: 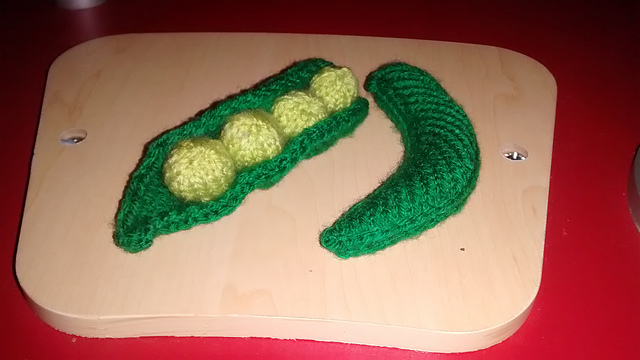 Peas! This is probably going to be the last knitted food for a while – I will be making more, but will wait till Felix asks for them! She actually seems satisfied with the influx she’s received these past three weeks…

Last but not least:

Have a good week everyone!

Of gloves and mittens

by RoxyPosted on December 7, 2015 Posted in Knitting No Comments

A request from work: 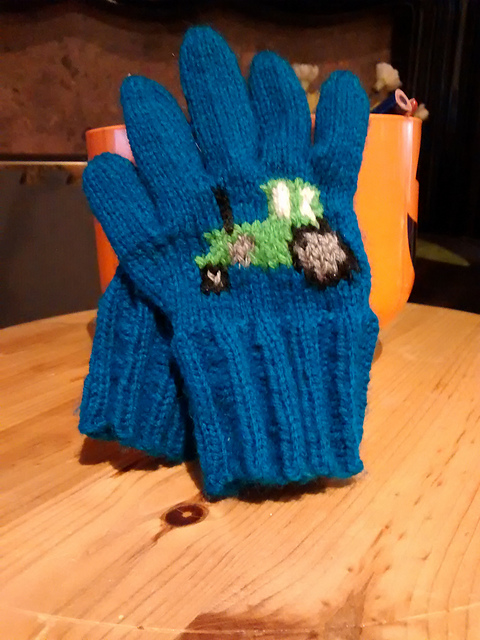 Tractor gloves! This is a combination of two free patterns – the gloves are Michelle Gloves by Drop Designs And the tractor is from Gustaf – tractor mittens by Kamilia

This was for his son, but, he’s recently had a little girl! And, important life lesson, never give one without giving the other. So even though shes too young to understand that, yet: 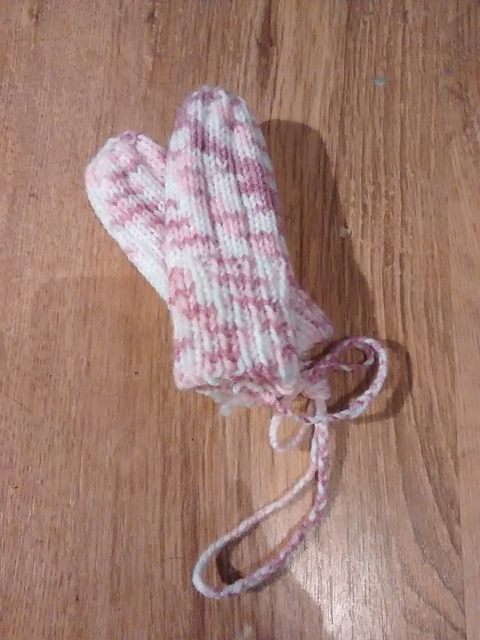 Adorable, aren’t they? Both items, that is!

Short post this week, busy making a start on getting the festivities ready!