by RoxyPosted on December 22, 2019 Posted in Knitting, Little one 1 Comment

It’s been one hell of a week. Fortnight actually. Home stuff, stuff that doesn’t belong on here, but needless to say it’s pretty much killed what little festive spirit i’ve had.

Seriously, I have felt festive for two hours this year. Which in turn makes it hard to create the magic for Felix and Inkling. I think I’ve managed – they’re eagerly counting down the days and it’s getting harder and harder to settle them at night!

The tree is up, the decorations out, presents squirrelled away everywhere…yep…even if I don’t feel it, it’s nearly here…

Even if I haven’t been feeling it, I have been cracking on with Christmas knitting! Though I had said I wouldn’t make any this year…

In order to not be eaten by the Yule Cat, you must receive something warm and wooly. I showed Felix a bunch of patterns and without looking at them, she informed me I was to make her a snake jumper. When I sarcastically asked her if there was a specific snake she had in mind, she replied cobra…and that it had to be a green jumper…sigh…

The jumper is based on Heart Sweater from the book ‘Cool knits for kids’ by Kate Gunn & Robyn Macdonald. I used the snake charts from the free pattern Swing-Snakes by Tina13.

My new gaming group are obsessed with Pokémon, and with the new sword and shield game out, have sorted themselves into teams of Pokémon type to have battles with their other friends. There was talk of team colours and then I saw this free pattern on Ravelry (Dawn/Hikari Pokéball hat in 2 variations by Mina Janssen) and I knew I had to make them.

So, top left is bug, top right is ghost, bottom left is poison and bottom right is dragon.

There’s other things in the works too, but you won’t be finding out about those until next year, so until then, have a good festive season!

by RoxyPosted on February 12, 2017 Posted in Cats, Knitting, Little one 4 Comments

After having knit the baby to be a blanket, Felix asked me to knit her something with the rest of the green wool. Having knit the snake and the baby blanket in said green wool, I was getting a bit fed up of it, but I couldn’t say no to her request.

So after having a look, it was settled on a cat jumper.

Seeing his eager happy face, and then Felix’s excited face (she is too young to understand the horror of matching jumpers, so we can excuse her) I caved in.

I knew there wouldn’t be enough green to do both, but with a few tweaks and some blue… 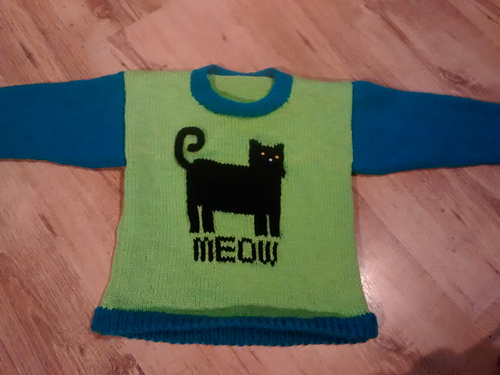 This is Felix’s creation. It’s based on the free Ravelry pattern ‘Cat’s Meow Pullover‘ by Amy Bahrt. Minus the striped sleeves. And the cat had to be black, not ginger, so that it was a Dashie cat jumper. Dashie is Felix’s cat. 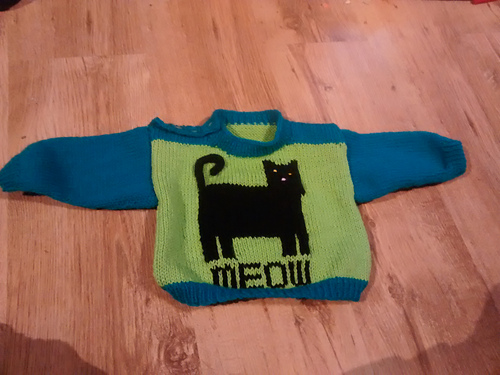 And this is baby to be’s creation. It’s based on the free Ravelry pattern ‘Children’s Bear Sweater’ also by Amy Bahrt. Except I took the bear off and put the cat on instead. And also, no stripy sleeves.

You can tell where I ran out of green, but I had already intended on a blue button flap (another addition of mine to the pattern to make getting it on baby to be easier) so it wasn’t a huge loss.

For playing chicken with wool, I didn’t come out too badly.

But that green is no more, so my next project can’t be green! Mwahahaha!!!!!!

Hmm…Speaking of chickens, I may just make those next…