RoxyPosted on July 8, 2018 Posted in Knitting, Little one 1 Comment

How I wish I was doing just that! It’s gotten so hot at the moment that we’re keeping our time outside to a minimum (I can cope with a fair bit of heat and sun, but Felix and Inkling? Nope) there’s even been amber health warnings issued!

Apologies for the lack of post last week – we had Rabbie, her husband, a good friend of theirs and Felix’s favourite doggy cousin, Missy all staying with us! Lots of fun was had, which Rabbie has covered in a fantastic blog post already, but between that and having no finished project to show you all, I decided to skip a week.

This week though I do have something to show! A birthday present that I was literally casting off at the last minute before heading out to give them! 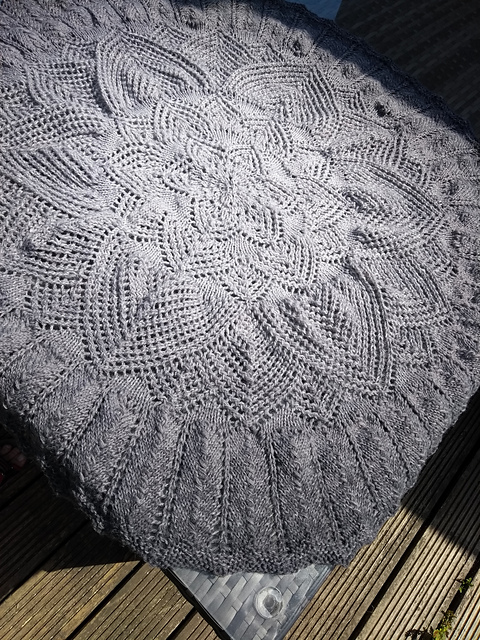 Its based on the free pattern Wavedeck by Kate Atherley – it’s actually a semi circle but I thought it would showcase the gradient change in the wool off beautifully and I had twice as much as needed…so I made it a full circle.

Which is why my timing was so far off, that and it’s been far too hot to knit with essentially a blanket on my lap…but it’s done and I have another ball of gradient wool, but much nearer the recommended yardage for the pattern, so I see another wavedeck in my future!

But after some smaller knits, at the very least once the heat subsides…