RoxyPosted on February 4, 2018 Posted in Gaming, Knitting, Little one 2 Comments

The knit project for this week is exactly what it says on the blog post title. 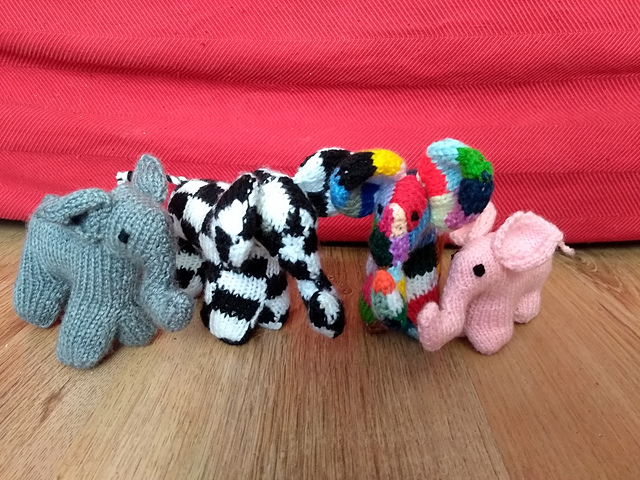 I made these based on the free Lion Brand Yarn pattern Sweet Mini Elephant – Rosie is the only one knit as written, but in smaller needles, the rest are worked in multiples of 5 stitches where possible. Oh, and the tallest is just three inches tall! So tiny elephants!

Unlike my previous Elmer’s I would willingly knit these again – which is good as I suspect I’ll be making more as presents!

This set will be making its way up to Scotland to the school my mum works at – like the Hungry caterpillar set and the stubborn goat, they’ll be used as teaching aids with the autistic children she works with.

Knitting aside, I’ve been brushing up on the rules for ‘No Thank you Evil!’ – an RPG aimed at introducing kids as young as 4 into the world of role playing. My sister, her husband and their furbaby Missy are coming to visit and we’re going to give it s trial run before I try playing it with Felix – get all the bugs worked out first!

I think this may be the only game however that, as I read the rules and the setting, I actually want to be a player! There’s just so much scope, you can literally be anything!

Engel has broken the character generation system already. His creation? An incorporeal ghost cat who travels through time with his companion Syphilis who has the ability ’embiggen’ so can turn into a giant raging monster.

After I sighed at him, he grinned and declared that actually, he wanted his character to be Syphilis.

Trying not to kill him, I enquired how he planned to communicate with the other players. His response: With a series of awkward rashes.

I’ll leave it at that for today.

2 comments on “Elmer and Friends”