Apologies for not posting anything last week – I decided to start a second big project and had nothing to really show without digging through the archives, and with everything going on at the moment…yeah…didn’t happen.

However! I have a finished a project (three technically) and an amusing anecdote to make up for it!

So, I was talking with Engel about what to do for our friends Christmas presents, they’re about to move into their own house, and it’s a pretty big thing, but what to do? What to make? What did they need? What was their colour scheme? (It’s grey and white)

After a bit we decided on personalized Christmas stockings – they could hold the presents, be used year in and out, would serve as a nice reminder and it didn’t really matter if they matched the decor or not as it was a Christmas decoration.

Me: They need to look really nice and traditional, classy.

Engel: They should have Drop Bears on them!

Me: I said classy.

Me: Which part of ‘traditional and classy’ did you not understand? 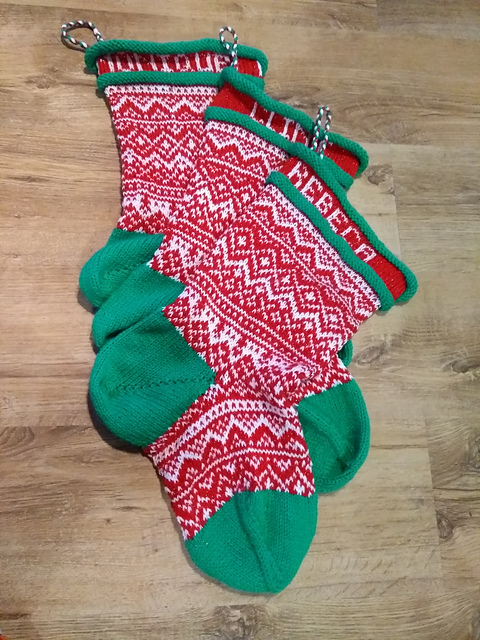 As you can see, I went for snowflakes, not Drop Bears. (I used the free pattern Northern Stocking by Rae Blackledge, and also sparkly wool – so pretty!)

Now back to my original big project, though there’s a few little ones I could quickly sneak in…ah, procrastination…