↓ Skip to Main Content
Home › Gaming › Back in my day…

Back in my day…

There used to be only 151 Pokémon, now, there are 802 Pokémon in total, (without including Mega Evolutions and Alola Forms, which are variations of existing Pokémon).

I’m not surprised to say the least, it’s a fun, catchy anime that has had generations of kids worldwide hooked. For me, it was the first gen, the original red, blue and yellow games.

And now, my nephew is hooked also. As I said in my previous post, I was going to make him a Pokémon themed scarf as I had made a Pusheen scarf for my neice.

When I mentioned this to Engel, and showed him the few patterns available!! online – pikachu or pokeball themed – he immediately told me to make a gyarados scarf (one of the original 151 Pokémon) as it had a long snake like body so would lend well to the shape of a scarf.

There weren’t any patterns available so once again, I cracked out the paper and pencils and got to work making my own pattern. I’m not publishing it as I somewhat doubt anyone else is going to be mad enough to make one! (There’s 34 pieces to it!) If I’m wrong, tell me! 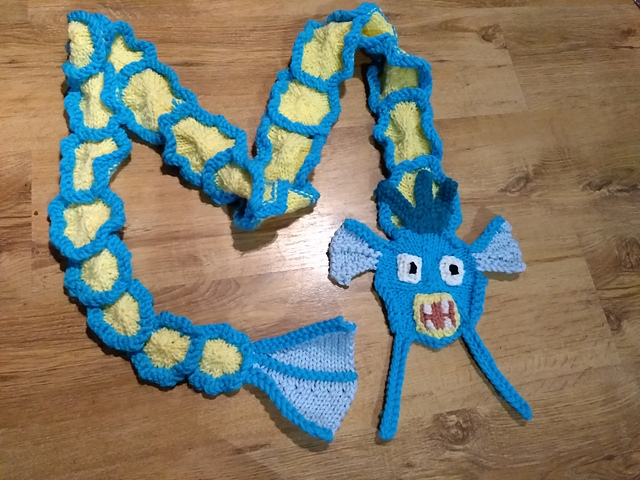 That’s all for this post, I have both a small project and a large project on the needles, so hopefully I’ll have one finished for next week!