↓ Skip to Main Content
Home › Knitting › From the never before posted anywhere archives!

From the never before posted anywhere archives!

RoxyPosted on October 9, 2016 Posted in Knitting, Little one 1 Comment

And by that I mean Ravelry, Deviantart and here!

Was reorganising Felix’s room (moving toys upstairs, moving others downstairs, moving some furniture about to better position everything…) And spotted two knitted things that, as previously mentioned, have never been posted.

Do without further ado: 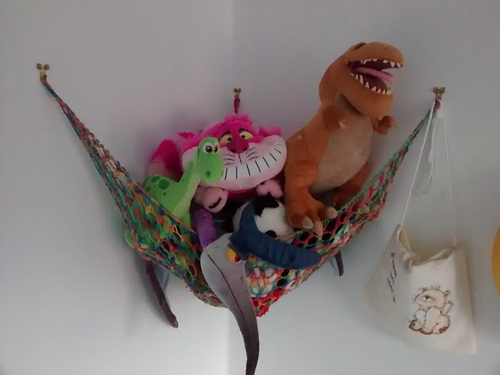 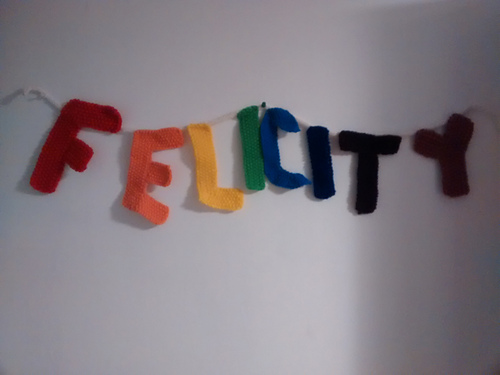 Felix’s name, as a cute knitted garland in all the colours of the rainbow! It’s several free patterns – the alphabet series by Frankie Brown on Ravelry.

You’ll have noticed a lot of rainbow colours here, believe it or not, I do like rainbows. (Engel at this point always mutters that he hates them) and for a little kids room it seemed a nice gender neutral choice of colours! Felix is a girl, we knew that when I was still pregnant with her, but I do believe in letting kids pick their own colours and interests, not get them forced on them. Hence lots of gender neutral toys and colours, up until she started to pick them for herself mind you!

Her favourite colour is green and toys are, currently, Octonauts and Thomas the tank engine – specifically Luke, the narrow gauge engine.

In other news it’s been pretty busy here – took Felix to see the Blackpool Illuminations (something I had never even heard of being from Scotland, but a staple childhood memory for all those living in the north west of England it seems!) And today we were at Gulliver’s World, this is the second time she’s been to a theme park (the first being Alton Towers but she was teeny tiny then and only just finding her feet, the majority of that trip was spend lost in the Alton Tower! I swear it’s a maze, you go up a set of stairs, turn round, go down the same stairs and end up in a completely different floor to where you started…)

So not much knitting has happened this week – though stage one of the xmas presents is complete, and stage two has begun!

I know there will be distractions, my resolve is waning rapidly…

They were in packs of ten! So it was really just four lapses of resolve!

Its my excuse, I’m sticking to it. Even if it does completely destroy my wool count for the year…

One comment on “From the never before posted anywhere archives!”