I think that’s an apt name for this: 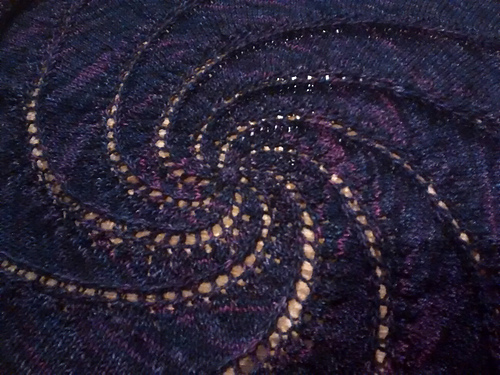 It’s based on the Free Ravelry Downloadable Pattern Vortex Shawl by Kristina McCurley and made with the yummy wool I blogged about last post.

The name comes from the current computer game Engel is playing ‘No Man’s Sky’ where you got from planet to planet, discovering, cataloguing and mining for resources as far as I can tell…to a relaxing soundtrack…great for switching off in the evening, and what I’ve been watching as I worked in my shawl… 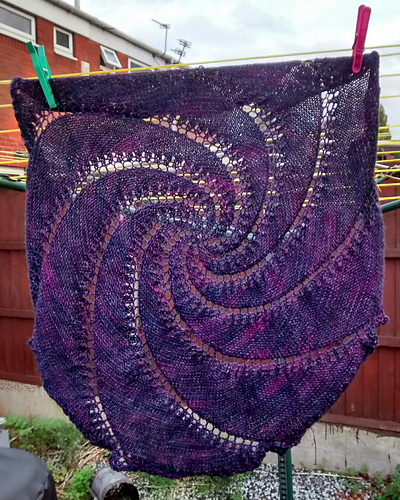 Not the most attractive photo if it, but the best colour match to real life, and it gives you an idea of the shape too. The merino/yak was lovely to knit with, and loved by certain four legged critters… 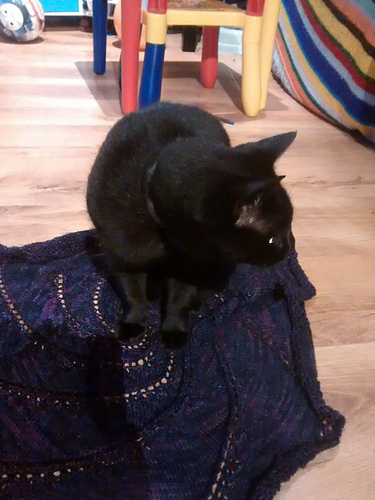 Salem wasn’t caught in the act of stealing it, three seconds after I put it on the floor to photograph…of course not…

I also wore it yesterday at a wedding banquet, where I shamefully had to call it quits after the fifth of eight courses…seeing as it started with an entire roast suckling pig between eight of us, I don’t think I did too bad. Oh, and for those curious, the heads in the fridge, I couldn’t let such a yummy treat go to waste!

Not much else to say really, life’s been ticking along, I had some family visit, been spending a fair bit if time with Felix, working on her crafty skills – pom pom caterpillars today! And pom pom monsters. She wanted to make a pom pom Cthuhlu, but decided the tentacles would be too difficult to make from pom poms alone…

2 comments on “No Man’s Sky Shawl”