RoxyPosted on July 27, 2019 Posted in Knitting, Little one 1 Comment 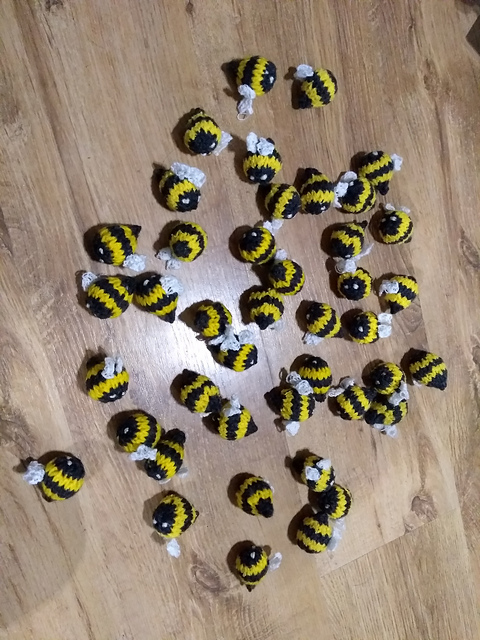 These are based on the free pattern Teeny Tiny Bumblebee by The Ginger Hooker – larger needles used and I changed the wings.

For those curious, Felix chose bees as the next insect for her mini beast birthday party, having already picked butterflies. I’ve ended knitting over 60 bees as Felix kept giving them away, Inkling decided they were the must have for his bed and my MIL took a shine to them…

Not sure if I’ll make any more insects for the party (she has asked for ladybirds, worms, stick insects and woodlice amongst others) as I have a few other projects lined up first, but we’ll see if I can sneak another one in!

Short post this week, it’s been so hot I’ve not had the energy to do much knitting and certainly not spinning, though almost all the raw fleeces washed!

I have picked up a little table loom which Felix and Engel have had quite a bit of fun with, and subsequently used up some of my odds and ends bits of wool!

Oh, and I’ve joined a new gaming group, well, more a friend is putting together a time and place for people who want to play boardgames, wargames or RPGs to get together and do just that. I have a number of victims – I mean volunteers – who want to play cthulhu with me! I feel an evil laugh coming on…mwahahahaha!!!!!!